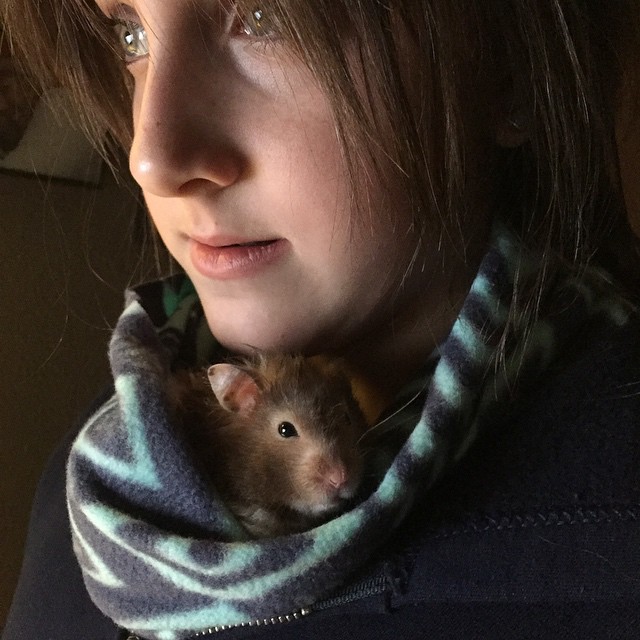 So this weekend, Emma went to bed on Sunday night and woke up to Tilly, her hamster, and best friend missing. It was as though someone came and plucked her out of her cage and left. The only disturbance was a fallen water bottle and a missing hamster.

Tilly’s cage is one that has an open top. It has always been so high that she could never scale the wall to exit it. However, being that hamsters are escape artists, Tilly found a way. We believe she pulled down her water bottle and somehow balanced on it just long enough to stand up, reach the edge of her cage and pull herself out and over the top. She’s been in the same cage for almost a year. We’ve gone on vacations, and moved the cage to several different locations in the house. She has never even gotten close to getting out. Sunday night she succeeded.

I’m convinced it would be way easier on Emma if Tilly had become sick and died. Instead, she just disappeared and Emma has been left behind wondering what is happening to her right now. Is she dead? Is she alive? I’m struggling with being so sad and so pissed off at that hamster for leaving. Then, I have to remind myself that she’s just a hammy and is wired to escape.

Last night we left snacks and food out in every room. We built a humane rodent trap and have been holding on to the fact that many hamsters return within a few days. A hamster can only live without water for three days. We have torn the house apart looking for her, and have left no space un-searched. Emma’s dad, Steve even went and spent over 80.00 on a construction camera so we could search the tiny spaces between our built-in cabinets and desks in the house. Every hole the camera could fit into has been searched and was found empty.

We have one hole that leads along the wall in our house out to a vent that has a screen over it. After close examination we noticed it would be very easy for someone as small as Tilly to crawl right up and out of the house through this pathway. In the past, we’ve have kittens and other animals that like to put their heads against the hole because they could smell the outside through it. As a side note, when we have given up on Tilly’s return, we will be sealing up that tiny crawlspace. It really freaks me out now. It is a huge possibility Tilly left the house and is gone.

So what now? We wait a few more days in hopes that she returns. Emma is not schooling today. I gave her the day off. She is fine and then she breaks down and cries. Then, she’s fine and brave again. Right now she’s sitting and playing WoW because I want her to completely gel out and think about something other than the fact her very best friend and favorite pet ever in the whole world is gone. Dang it! When I was a kid I would have been told, get to school, life doesn’t stop… That may be why I’ve spent the morning cleaning house. It makes me feel better. But I think life does stop. It has to so you can process things sometimes. It can’t end, but I’m determined to allow my girl to learn to grieve, and to give herself a break. It’s so sad, and it’s ok to feel sad over it. Emma has been apologizing for crying, and even said she doesn’t want to cry too much because she’s afraid I’ll say, “No more pets because they make you too sad when they die.” I do feel like that, but I would never say or do it. I totally get how much she needs a pet. It’s who she is and she’ll always have to have a pet of some sort.

PS You can check out Emma’s blog to hear more about her life with Tilly.