That’s right! A Saturday post shared on a Tuesday, because I can. Plus, the weekend was nuts, dinners on Thursday, Friday, and Saturday, then a brunch on Sunday! I’ve been so busy and so blessed to have people to celebrate with. This has been a fabulous holiday season with friends and family and we haven’t even had Christmas yet!

So let’s get on it. This week we are going to take a look at the entry and main hall of the ranch house. Check out the before pictures.

Ok, here are the before pictures of the house’s entry and front hall. As you can see the house is very open. The space surrounded by the dark wooden posts was once an atrium area with a jacuzzi in it. Yes, I really just said there is a jacuzzi in my living room. The ceiling used to open up to the sky and you could see the stars while sitting in the jacuzzi. You can also see the pink carpet in the dinning room and den. Anyway, notice all the rock everywhere. It gave the house a real cave feeling as you walk in. That large rock wall is the first thing you see when you walk into the house. Then, there was rock on four of the posts around the entry. After the three drop down rooms we are left with a runway-like wood floor. For a girl like me, it spells disaster. I’ve been known to walk into a large wall let alone a post! If I can fall down a staircase, I can’t even imagine how many times I was going to fall into the dining room or living room. Needless to say, we’ve been making some changes. 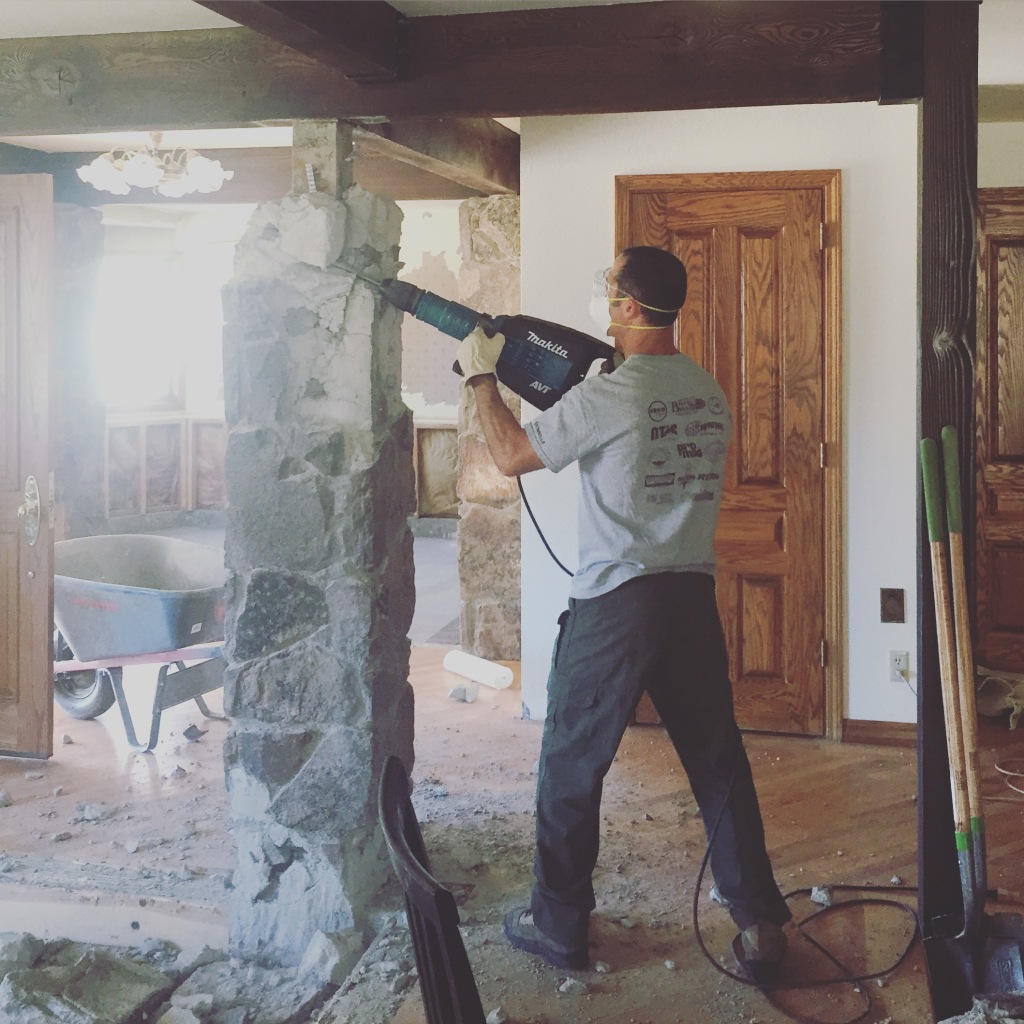 We bought a jackhammer. We knew with all the rock and cement in this house, we were going to be renting that thing all the time, so we bought one. Steve is in love with it. Personally, I hate it. That thing is so heavy, I used it for an hour and I thought I’d die. Here’s Steve using it over his head for about 5 hours… He is a beast, not kidding. I have no idea how he does it. Then, he gets up the next day and gets at it again. That’s what being in good shape looks like. As he breaks off the cement, rock and cinderblocks, I scoop it all up and wheel it out to our driveway. 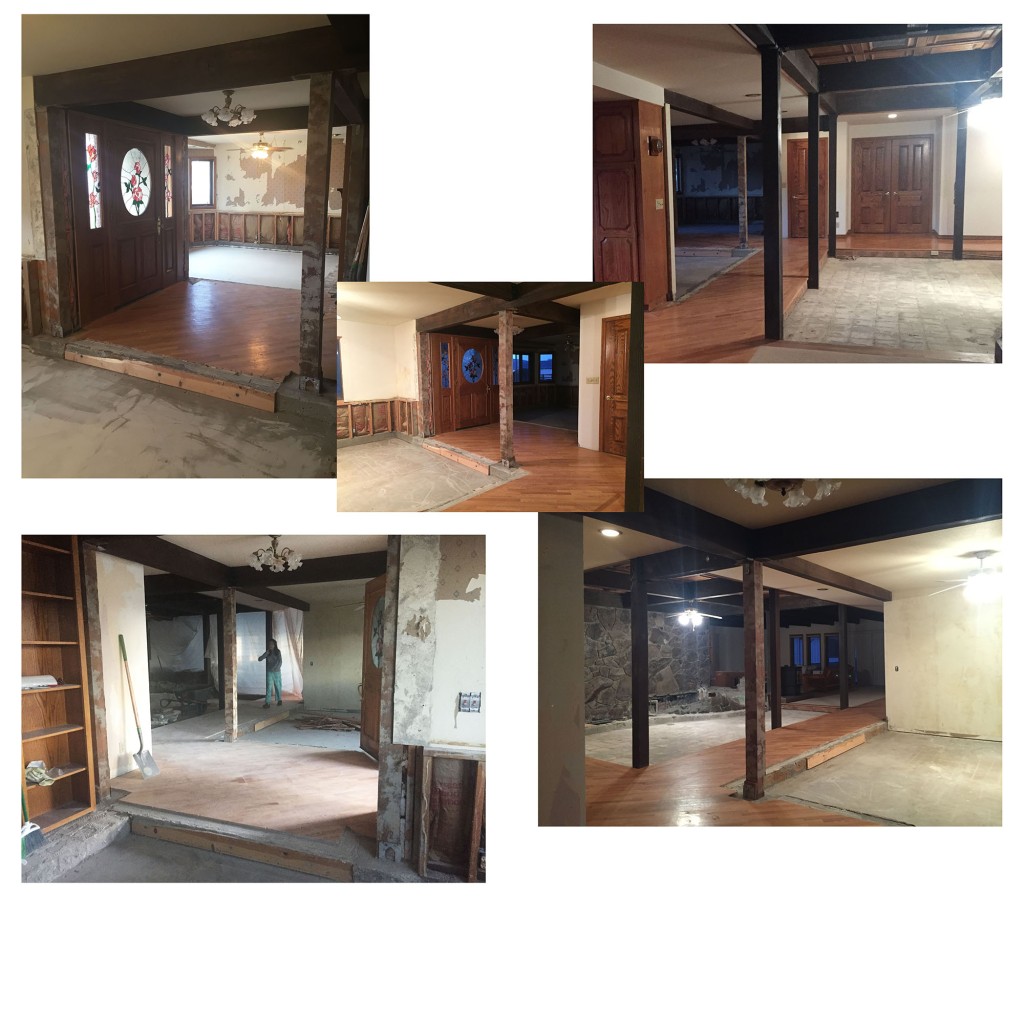 So, you can see in these photos what we’ve done so far. We removed all the carpet and some of the wood flooring. All four posts around the entry have been stripped of the rocks. I was so happy to see that putting sheetrock over the posts next to the door will make them completely disappear. Seriously, I cried when I noticed it. It’s showing me that this place is going to look like a real house and my visions for it just may happen! As you can see we’ve removed a lot of other things in the place but I’ll give the details on that as we travel through the rooms themselves. I really wish I was able to get in the house and shoot it like I would professionally, but I was just too excited to get to work and I really don’t want my camera around the construction dust. We’ll have to look at cell phone pics during the real messy parts.

Here is what I’m referring to for my inspiration:

I told you we’d be seeing this picture a lot. Notice the posts in the image. I really want to sheetrock in all the dark brown posts in the house. I’d like them to be painted the same color as the walls and have the same moulding. I think it’ll really finish off the look and give us a clean and classy style. PS How much do you love those lights?

How about a little moulding down the hallway walls? I do plan on a table against the longest hall wall. That would be the wall you look down as soon as you walk in the front door. http://honeywerehome.blogspot.com/2013/08/dining-room-decor-updates-world-market.html 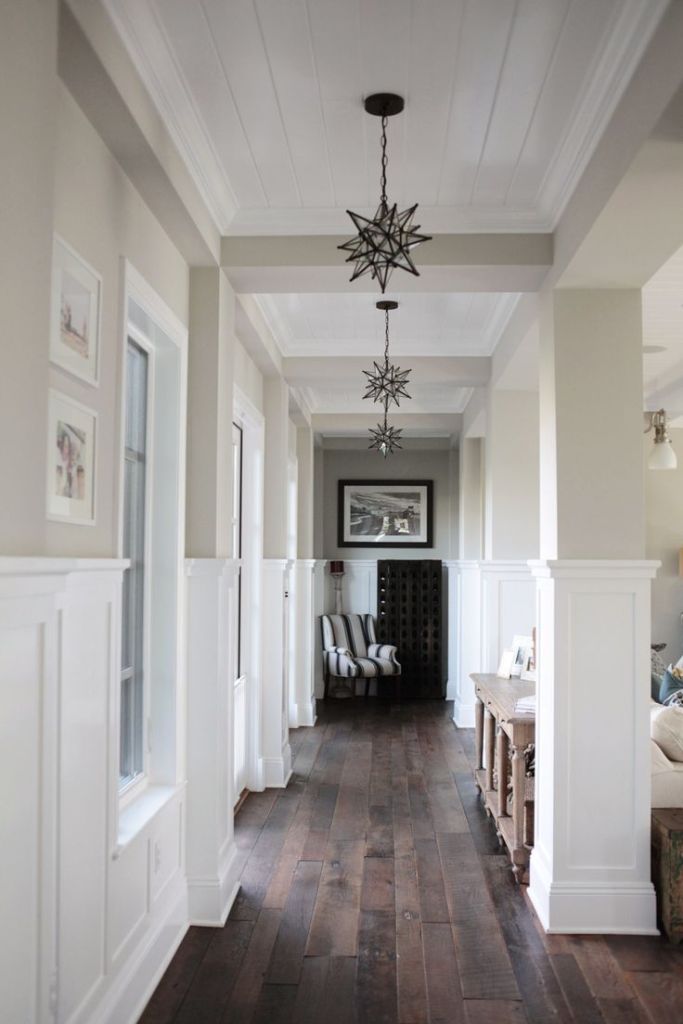 Another way to cover the posts. I’m pretty obsessed with the plank wood ceilings.
http://www.stylemepretty.com/living/gallery/picture/1469866/ 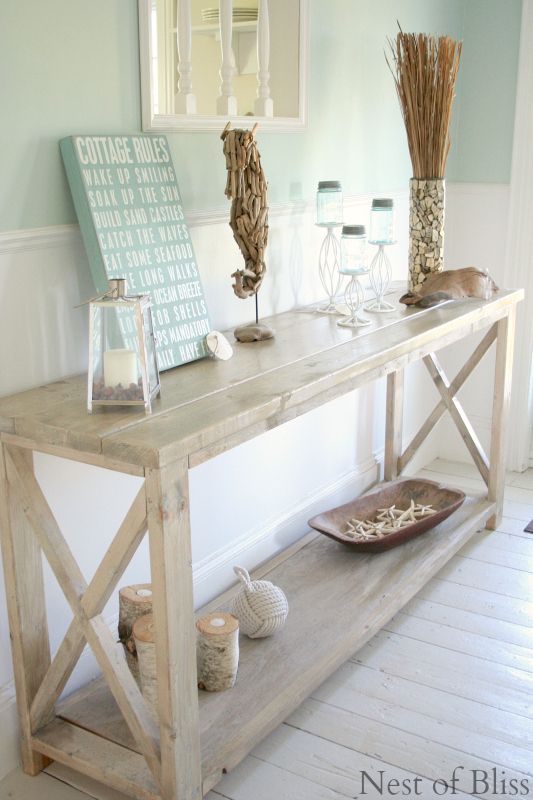 I’m loving the moulding idea, I think it would really warm up the house and add nice detail. I like the table here too. http://www.nestofbliss.com/2014/06/summer-tour.html

This is the same basic layout as our entry. I like to look at it because it makes me believe. http://www.architecturaldesigns.com/new-house-sample-plan-73326HS.asp

I really love the wood trim here and the wood finished column. The light fixture is great and I also like the idea of the runner along with the table. All great ideas that help me visualize the end product of our entry. http://www.houseofturquoise.com/2014/11/highland-custom-homes.html Here is a quick look at a couple of covered posts. If you have to have some posts in the middle of your house, which by the way we do, then this is a pretty nice way to go.
http://www.houzz.com/photos/338280/Classic-Coastal-Colonial-Renovation-Great-Room-traditional-family-room-newark

Those are the ideas for now, you know I have a thousand more brewing.