Once upon a time, I was a third grader. Prior to becoming a third grader, I was a giant fan of the Osmond Brothers. They were a group of singing brothers in the 60’s and 70’s. That’s for you young people who don’t know these boys. My mom took us to several of their concerts and bought us all of their albums. They sang other people’s songs, so I guess she could tolerate them, but I do remember they were not her favorite. She took us anyway.

By the time I entered the third grade the Osmonds were not as popular as they had been, but unfortunately, my Osmond Brothers Lunch pail was in mint condition. Thus forcing me to carry it to school for yet another year. I’m not sure why my older sister didn’t have problems carrying her pail to school (Yes, we had matching Osmond Brother lunch pails), but I began getting teased about mine. Either kids had no idea who they were or I got a hard time for having them on my lunch pail. I hated having the attention brought to me by my bright purple and pink lunch pail covered in those brother’s faces.

The year before, I used to stare at all of their faces plastered on my bedroom wall, just dreaming of which one I would marry. Now, I was down to hating every last little smile looking at me from the side of the box. One day, I put it in the lost and found bin hoping someone would take it and I would never see it again. Unfortunately, my big sister found it and was more than happy to bring it home to me. I remember asking my mom for a new lunch pail and she said something about how I “just had to have it” and that it was in very good condition…. Blah blah blah, stuck with it forever. Then I thought, wait if it’s in bad condition could I have a new one? So, the next day I kicked my lunch pail all the way home from school. Just kicking it along the ground and watching it quickly slide along the sidewalk ahead of me, until I could catch up to it and kick it again. By the time I got home, it was scratched all over and looked terrible. So, now I had a pail that was a beat up mess and was told I would still be using it.

Later in the year, I came home sick from school and my mom made me soup. I remember thinking the soup was gross and hid it in my beat up stupid lunch pail and stuck it in our laundry room. Look, don’t try to figure out what kind of weirdo kid I was, just take it for face value, I was really a pain. Anyway, the soup molded over the rest of the week, and when my mom found it I not only got in trouble, I had to clean it. Then I was still stuck bringing my old beat up, ugly, moldy, stinky, purple and pink lunch pail to school. Every time I saw those faces smiling on the side of it I got mad. It was worse turning it around just to see Donny holding that mic in both hands… probably singing Puppy Love. Heavy sigh…

I was telling Emma this story today when I decided to google it and see if there were any images. Low and behold! MY LUNCH PAIL! What? 35.00 for the thermos? Shoot me.

Side one, seriously, look at the side, they’re in their bathing suits! 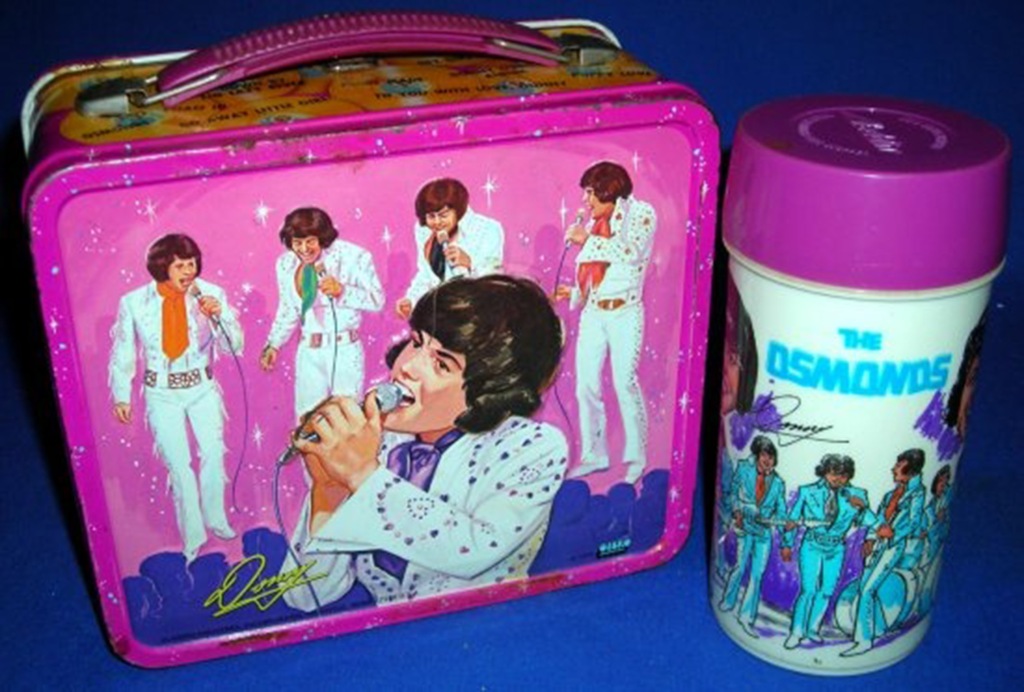 Side two, I seriously hated this side! I don’t even know why. I’d walk with it pushed up against my leg trying to hide it. Remember how they all had their distinct “colors?”

This is a little like the one I had… AFTER kicking it home. Just imagine an old bowl of soup molding in there…

One thought on “Once Upon a Time-Lunch Box from Hell”