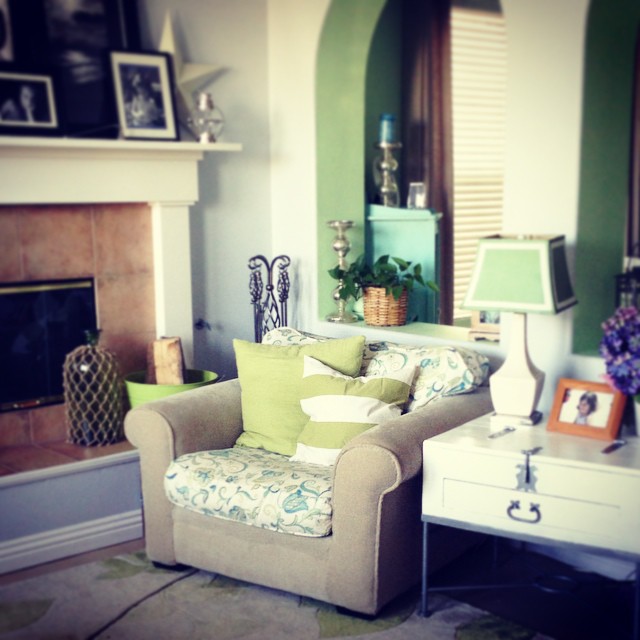 Today I’m finally getting around to posting some pictures of a project I completed a little while back. This project took me forever. Not because it was difficult, but because it took me actually sitting down and doing it. It was stuck in the middle for a while. Once I actually committed to completing it, it went fairly quick.

When we moved into our house, the decor was kind of a wine country/Tuscany style and our furniture was dark green. Over the next ten years the house went through a couple of changes but the dark green couches and chair continued to work. It wasn’t until I changed everything over to bright and light that they no longer worked for us. We ended up giving away our couches and bought new stuff but we still had this big, fat, dark green chair. It was super comfy but just ugly. 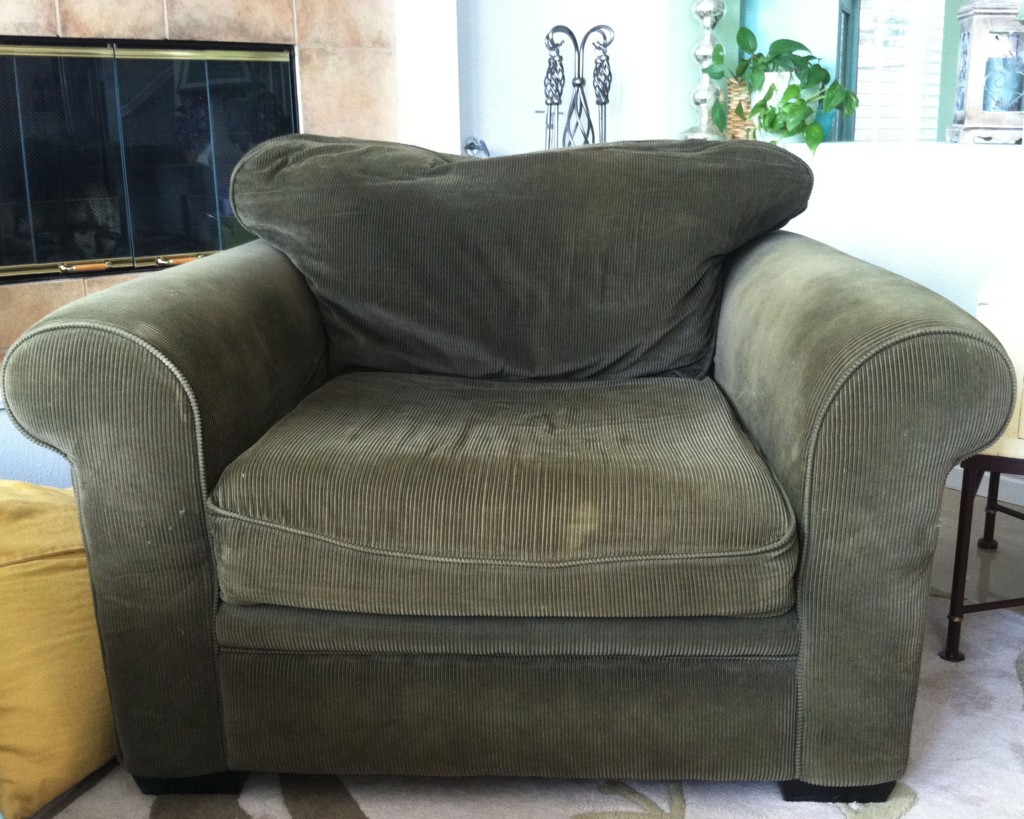 We still needed a chair for the corner of our living room. Everything I looked at was so expensive that we were going to have to leave the space empty or cover the chair with a slip cover, which I had already been doing. I finally decided that rather than just giving the chair away or spending money on a new one, I’d just re-upholster the old one. Here is the disclaimer! I do not know how to upholster furniture! I just figured if we were going to loose the chair or just give it away, what can it hurt to just try it. I’ve reupholstered stuff before and was able to make it up well enough to save pieces of furniture in the past so I thought I’d give it a shot. Worse case scenario, I throw it out or cover it with the same ugly slipcover.

I bought some stuffing to kind of build up the cushions again. Then I picked out about 130.00 worth of fabric from Joann’s and started sewing. I made “bags” for the cushions and then sewed them closed. Then I sewed around the piping to secure the covers which made them look more fitted. I also used a staple gun to cover the rest of the chair with another fabric. I then did the same “fitting” by sewing the fabric around the piping.

This chair, I guarantee is so not perfect! Seriously, it’s weird in a couple of places but it looks 10 times better than a slip cover, and 100 times better than dark corduroy green in my beachy white house. I also liked that I could hand pick the fabric and the end result made me feel like I got something new without paying an arm and a leg for it.

Here is my end result: 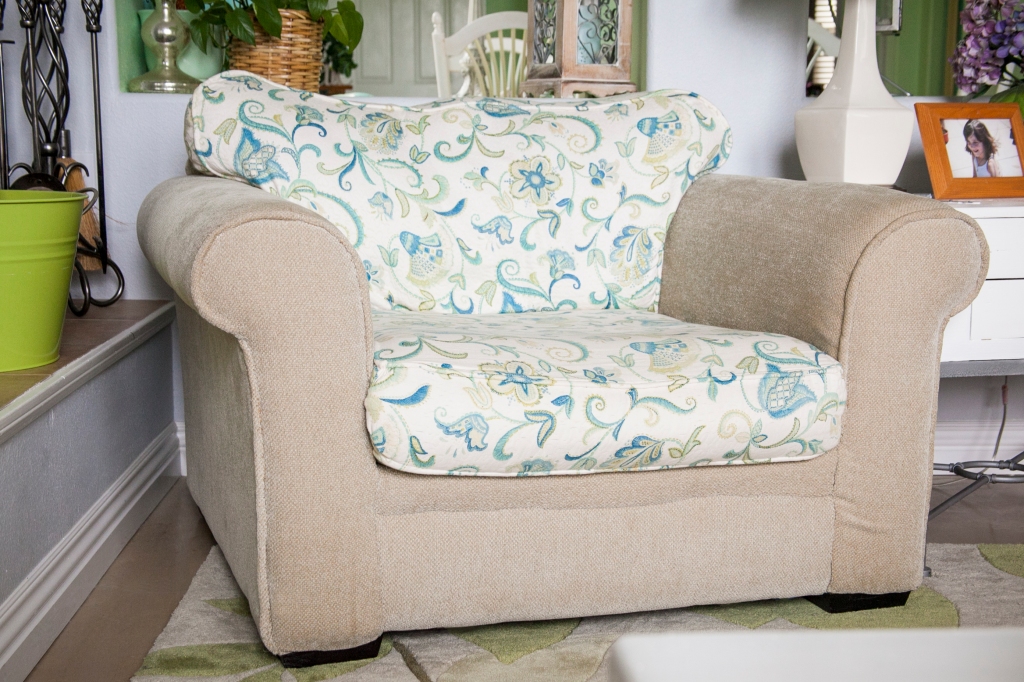 I really liked the opportunity to use two different fabrics. 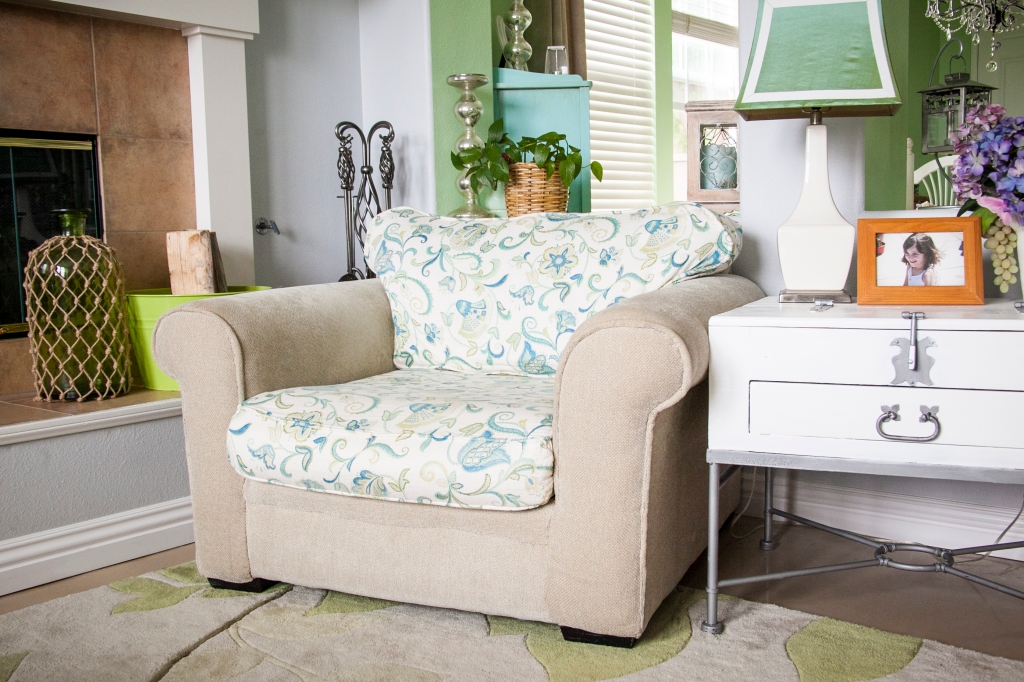 The chair no longer “stood out” but instead blended in. 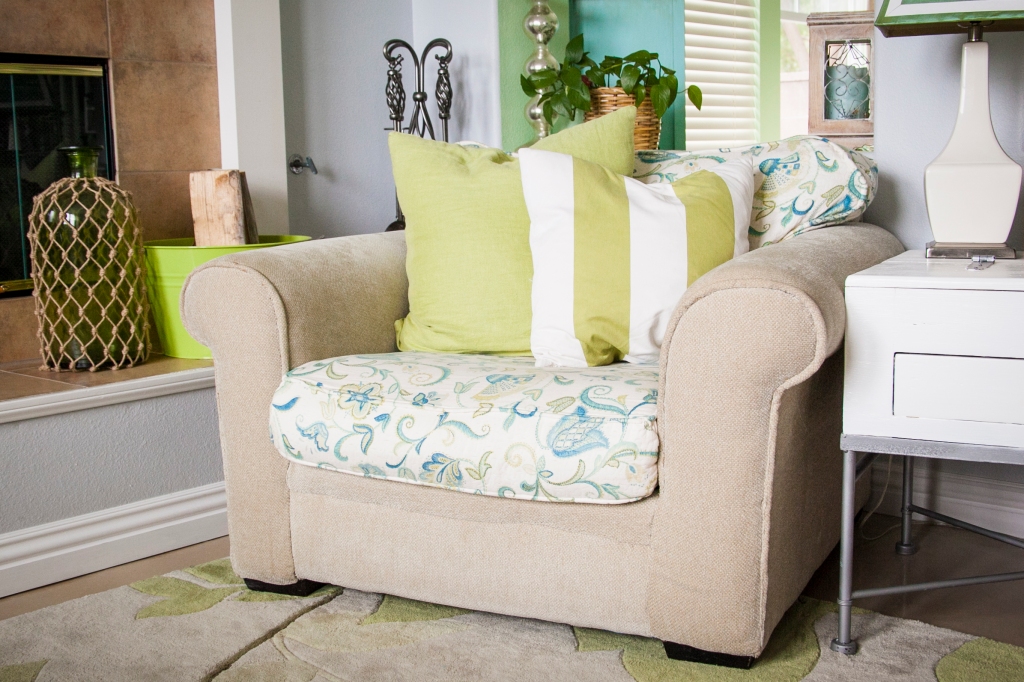 As you can see I really like blending patterns. These are the pillows I have on my white couches so it brought the room together when I placed them on the chair too. 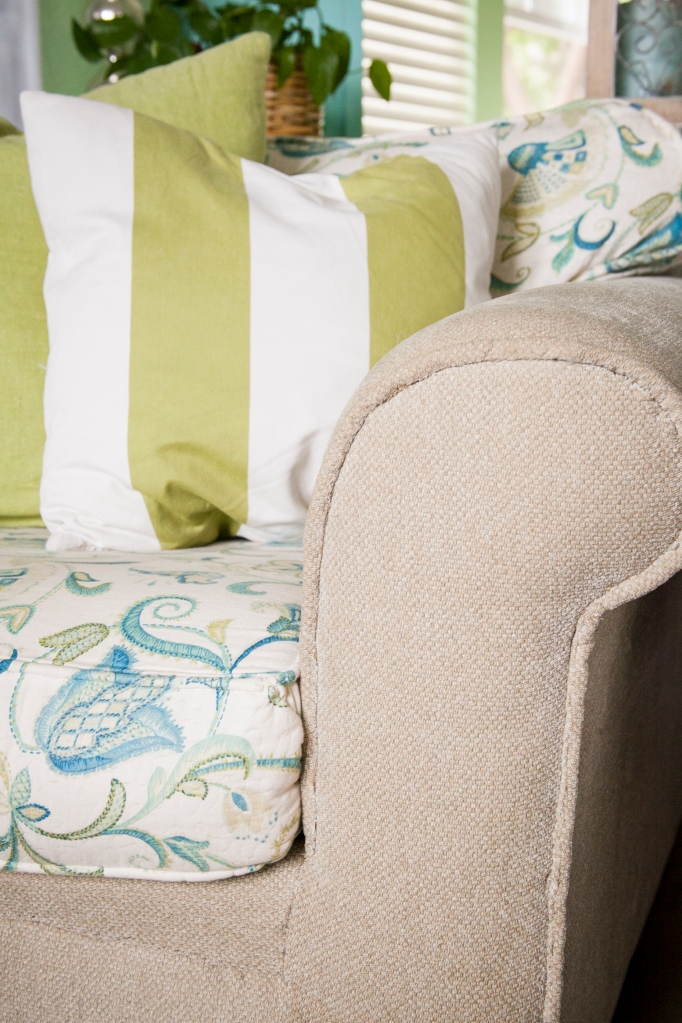 You can totally tell this is where I brought my edges together. Like I said, not perfect but it worked. My fingers were sore from sewing. I used an upholstery needle and clear plastic thread that looks like fine fishing wire. It’s strong and pliable. 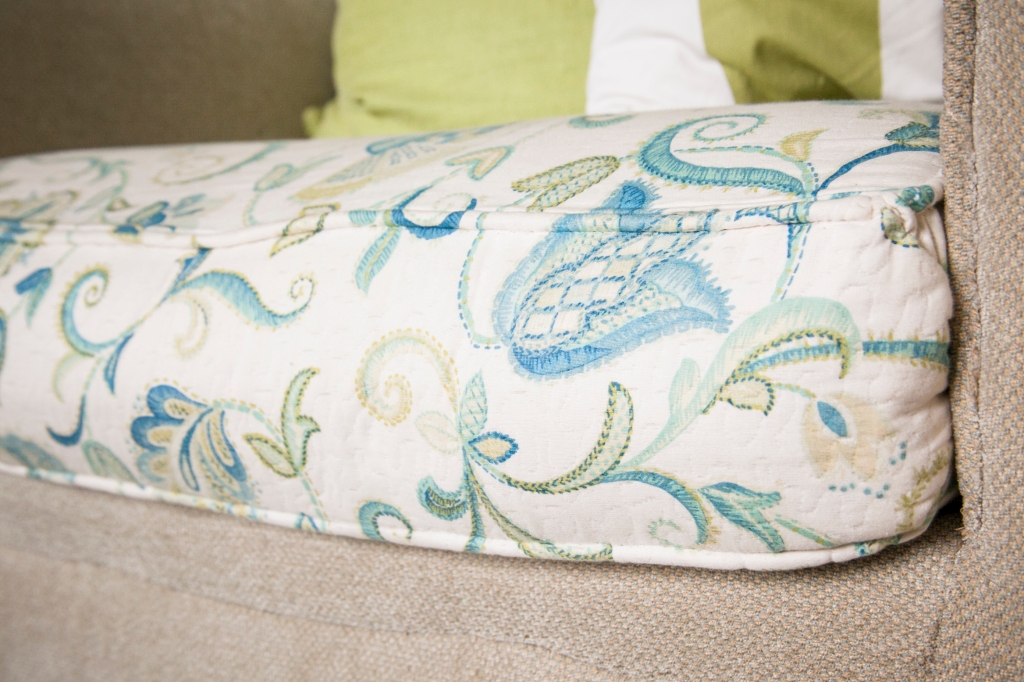 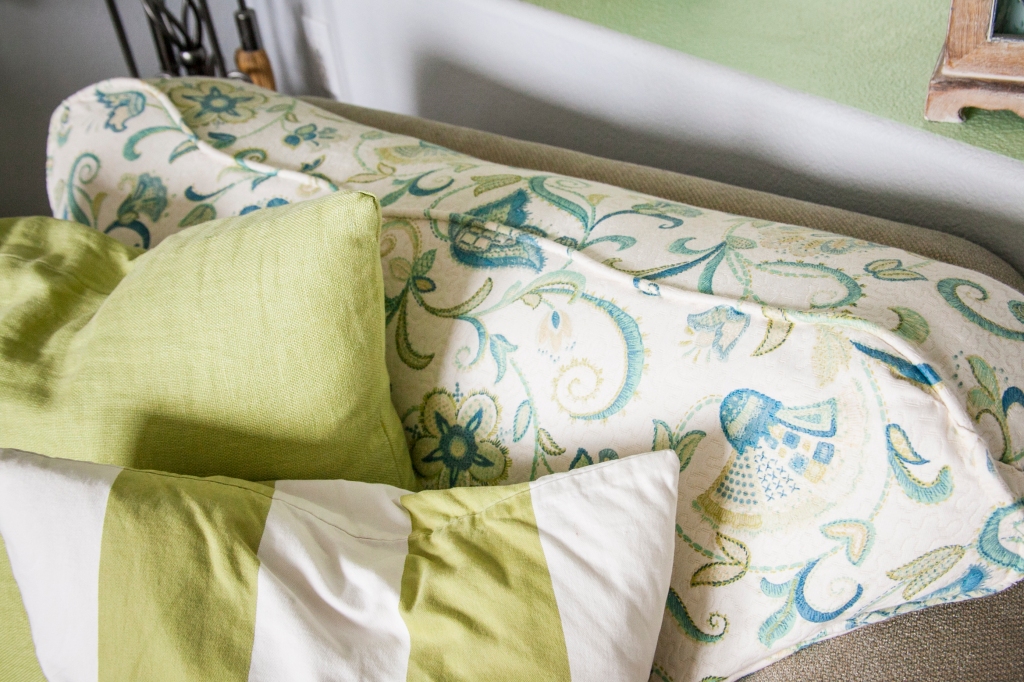 I love color and patterns! This is very cozy and squishy chair. The added padding made it even softer and gave it a more relaxed look without being as broken down as it was.

So, rather than no chair or spending a huge amount of money on a new one, I used what I had and made the old one work. What pieces could you save at your house? Have you ever tried to refurbish old furniture?